"Architecture can be seen as a cultural production rooted in history as well as in the reality of its own time, giving form to collective ideas and values. Through the principles of architectural form architecture creates a reality of its own, the human habitat. As a collective art, architecture not only organizes the reality of public and privates spaces; as a formal reality of its own, it also acts as the symbolical expression of social life. The rules of architecture emerge within the confrontation of the concept with the conditions of the real givens (like urban context, program or material) and are contained within its own tradition (“L’architettura sono le architetture”, as Giorgio Grassi has put it), to which each new work is contributing. Architectural reality is related to outer-architectural aspects as well as to the inner-architectural reality of the work itself. If the double aim of architecture should be ‘to allow and to resist’, its productivity would depend on the confrontation of both realities. This remains true in particular for urban architecture in its conflict between autonomy and contextuality. The question, how this (supposed) conflict gets resolved in the actual work remains always open to discussion.
The urban reality of architecture therefore is not founded in a platonic idea of the city as intellectual construct, but rather in an understanding of the historical and cultural development and the physical concreteness of the city connected to social life.
The invited architects are asked to explain their relation towards urban reality through their own projects, thereby pointing out specific problems for the theoretical discussion." 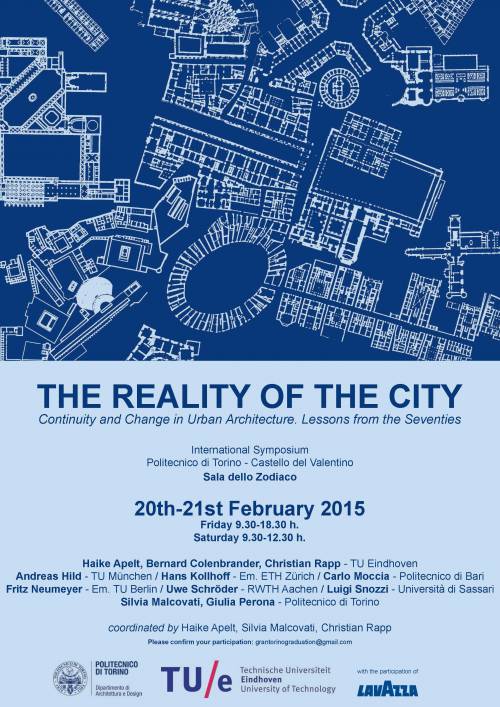 News: THE REALITY OF THE CITY. Continuity and Change in Urban Architecture. Lessons from the Seventies, Symposium, Torino
Datum: 20-02-2015