fragmental_on the dissolution of public space

Rome forms the foundation of a basic understanding of the identity and heritage of European architecture. Its ruinous monumentality is still more visibly present today for the city, for architecture and art than perhaps in no other metropolis in Europe. As a thematic follow-up to the symposium „monumental_public buildings at the beginning of the 21st century“ 2019 at the Baukunstarchiv NRW, the theme of „fragmental_dissolution of public space“ at the 2022 symposium at the Villa Massimo in Rome examines the ambivalent identity of a monumental and simultaneously romantic understanding of space between the built environment and its dissolution, between architecture and the reconquest of space by nature. At a time when our relationship to the unbuilt, to the „natural“ is being radically questioned and the static role of architecture is beginning to falter, concepts such as dissolution and fragmentation seem to be taking on a new identity-forming role in recent architectural development. But how does the relationship between architecture and the city develop?

The symposium seeks to take up the concept of the „public“ within recent positions and to critically reflect on its relation to a classical-romantic understanding of architecture.

With the exhibition RomeBerlinRome, Heike Hanada and Uwe Schr der look back from the year 2070 into the distant future of the European city. The future viability of the city lies in the structure of „solids and voids“, which can only develop through a constant process of increasing the density of open structures to form urban textures. The predecessor of this process can be found in the lessons of the 19th and early 20th century city, tangible in both Rome and Berlin, but which today are increasingly threatened by disregard for the cultural assets of the city.
2070: Architecture has turned its back on the surrounding countryside. The city is again the subject of void and solid. Monumental buildings enter the city from its periphery. They are virtually waiting on the sidelines, waiting to take the urban stage. From the edges, the unity of the city is defined. Island and archipelago-like dense forests crisscross its area. They are like sunlit openings of the forest. As voids, they are counterworlds to the solids of the city; with them, the horti conclusi reemerge in the city of the 21st century. They form internal peripheries that interrupt the urban continuum of time, memory, and recollection. Like the Tiergarten in Berlin or the Giardino Villa Borghese, those voids grant nature its own space in the city. In a romantic sense, they become places of phantasmagoria and vagabond memory, all that is not fitting for man himself. 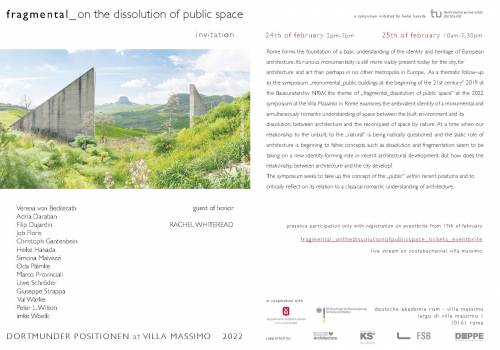 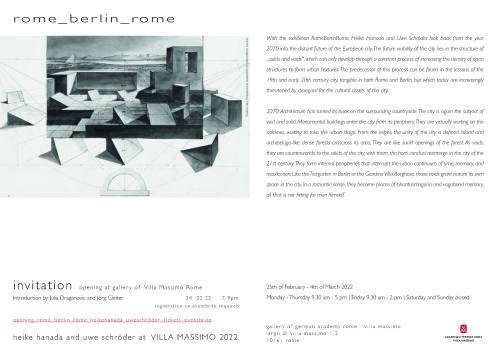